The biggest question people will ask when making a decision to purchase virtual reality (VR) hardware is what is the difference between the HTC Vive, Oculus Rift, and PlayStation VR. You can’t run them all on the same machine, but how powerful do you need your PC to be to make sure that they all operate smoothly?

Well, the answer isn’t as simple as you might hope. There’s a lot to consider and it isn’t just about the hardware. So much more goes into the software, the operating system, and the capabilities of the hardware that makes it hard for people to answer the question “what do I need to run Oculus Rift, HTC Vive, and PSVR?”. It’s not a simple question and the answer is going to vary from game to game and even from person to person.

Hardware Requirements For Your VR Project

There are a large number of VR hardware products on the market, and each one has a different set of features. When deciding which product to use, you should identify the requirements for your application and choose a device that fits your specific needs.

To optimize the performance of your virtual reality application, consider the following key components: Graphics processing unit (GPU), screen, audio, and locomotion capabilities that give you the ability to move from one place to another in a virtual world using only a small space in the real physical world (VR headset or VR goggles).

The graphics processing unit (GPU) is a graphics chip that happens to have a microprocessor and memory on it. The GPU is the heart of any gaming computer because it’s the chip that does all the graphics processing. It renders, or creates, images on the screen. Because of all the heavy-duty rendering that GPUs do, they’re usually the weak link in a system, even in gaming systems. As a result, you need to be careful when choosing a GPU. It’s critical that you choose a brand that makes high-quality products and a level of performance that suits your needs.

The type of graphics processing unit or GPU you choose will depend on your needs and budget. If you are a gamer, there are a few factors you should consider when choosing a GPU. You want a GPU that is compatible with the latest games to experience the highest frame rates. You also want a GPU that doesn’t get hot and has a low power consumption. Once you know your needs, you can get a GPU that is both affordable and capable of keeping up with the latest games.

There are two major types of GPUs: integrated GPUs and discrete GPUs.

Intel, Advanced Micro Devices, Inc. (AMD), and Advanced RISC Machines (ARM) all make integrated GPUs that are basically built into the central processing unit (CPU). They’re great for basic video games and for non-gamers. They’re also very cost-effective and power efficient. Discrete graphics cards are more powerful, but they are also more expensive. You should choose which one is right for your needs, and don’t forget to check the prices of each card before purchasing!

When it comes to VR hardware requirements for monitors, there are some limitations that you need to consider. The first thing you’ll need to look for is adequate screen resolution. It’s important your screen provides a high enough resolution to support a high FOV. You’ll also want to make sure that the screen itself is properly supported by a sturdy rig that won’t give in to the pressure of the headset.

Another important thing to consider is the refresh rate of the screen, especially for screens that are used for gaming. These screens have to have a high refresh rate to ensure that you get the most up-to-date graphics. A lower refresh rate may cause you to experience nausea or headaches because it isn’t providing you with a realistic experience.

Virtual reality audio requirements rely on a couple of factors. First of all, what type of VR experience do you need? If you’re creating a game or a movie with a lot of action, you’ll need 3D audio. For just a normal movie, you can go with stereo sound or the more basic mono sound.

The goal is to create the most realistic experience when you are developing virtual reality software or you are working on a virtual reality game. It’s important that the user feels immersed in the experience when you’re creating VR software. As you create the binaural audio, you will want the user to feel like they are in a real-life environment.

You’ll also need to consider the VR platform you are working on. For instance, if you are making a VR movie for the Oculus Rift, you need to take the specific audio requirements into account, and if you’re creating an app for the Samsung Gear VR, you have to comply with the audio requirements for that platform. In any case, you’ll need to make sure your sound quality is up to par, and that it gets the job done.

No matter what level of experience you are at in your virtual reality journey, there are a few things to consider when selecting your VR headset. First, determine how you want to experience this technology. Do you want to be completely immersed in the virtual world or do you prefer to look around your physical environment? Do you want large and bulky equipment over your eyes or do you prefer to wear something a bit more subtle? Depending on your answers to these questions, you’ll be able to select which headset would best suit you.

If you’re using a virtual reality headset for the first time, the best way to do it is to download the manual or user guide. While the hardware is complex, the software is relatively simple. Before installing any software, be sure you’ve read the requirements for the hardware and software. Once you have the headset, the rest is easy.

First, download the application you want to use, then start it. If you’re not sure what application and/or experience to start, there are plenty of options to choose from. Whatever you choose, it’s a good idea to practice with the headset before you use it for work. Also be sure to read the manual and user guide for any specific game or application to understand the policies, rules, and setting for it. 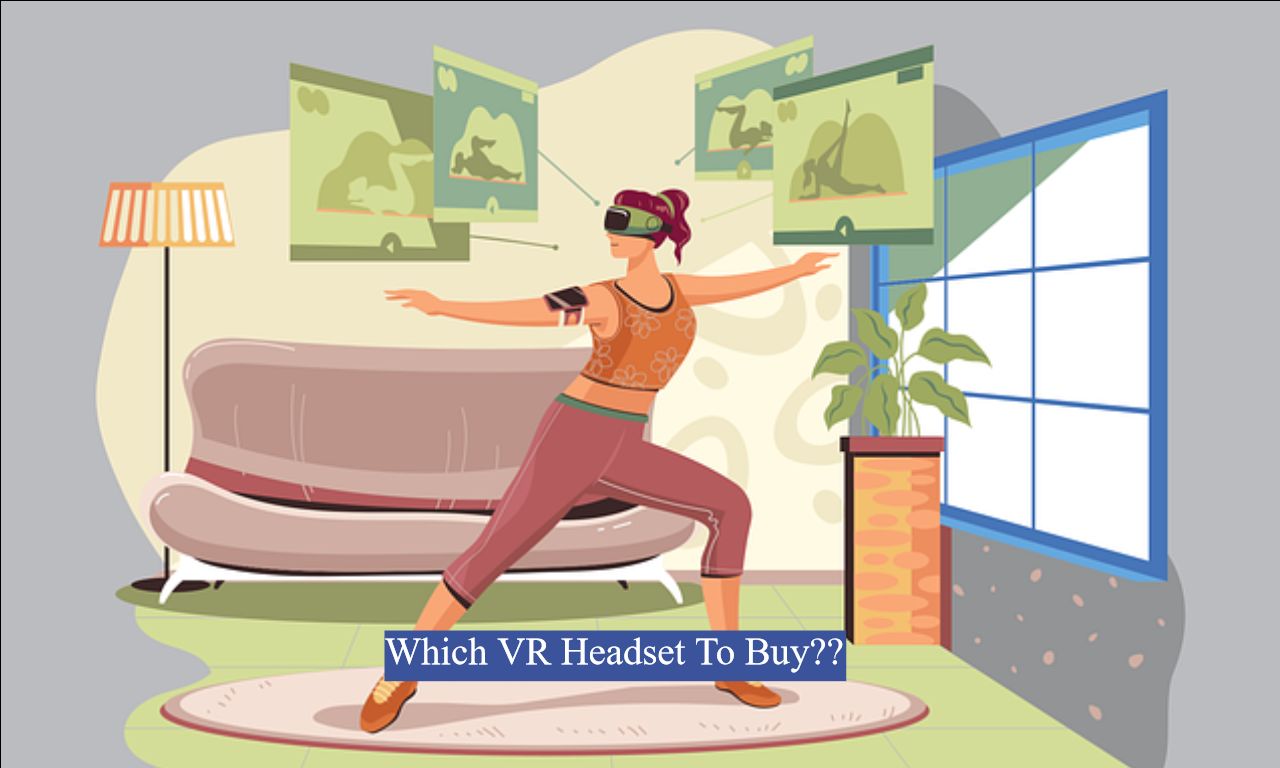 Before you choose the best VR headset for you in 2022, it’s best to look at what you need from a VR headset. Do you have a computer capable of running VR? How important is the quality of the picture to you? Do you want 3D or 2D? You should also consider the cost that comes with these choices. You don’t want to spend too much on VR in 2021. The costs are bound to drop as the technology gets better!

The Oculus Quest 2 is a very consistent improvement on everything the first version did right. You’re getting a lot of bang for your buck, so to speak, as the Oculus Quest 2 costs $300, making it absolutely the easiest way for newcomers to jump into VR without investing in expensive hardware.

It seems easier to slip in and out of than say Google Daydream. The device is comfortable but snug which is good since you don’t want this thing going anywhere while you’re trying to dive into another world!

Sony has been the premier innovator in the entertainment industry for some time now and the launch of their virtual reality headset has been no different. The PlayStation VR headset is a revolutionary product that blends state-of-the-art virtual reality with intuitive, natural controls.

Valve has gone all out with their VR headset. It includes a 2160 x 2160 panel that’s crisp and clear, and the foveated rendering capabilities reduce the breakdown in the virtual world.

The Valve Index has a frame rate of 90 Hz, and the controllers are the highlight of the whole system! These controllers are so good because they have 16 sensors, each with a 10 mm x 10 mm tracking space. They are powered by 32-bit ARM, so they can track your fingers at all times in the virtual world. You can use your hands to do more complex things, like pick up a virtual object or play the piano.

The controllers also feature a touchpad, which lets you swipe through menus, and a home button. The Index is currently on sale for $499. Check out the Valve website for more information.

Even though the HTC Vive Pro 2is one of the most expensive VR headsets to enter the market, it is worth it if you have a high-end PC and are in need of the best possible VR experience.

It’s not a good option for casual users, but if you are a passionate PC gamer and have a desire for the best possible gaming experience, then the HTC Vive Pro 2 is for you!

It’s great that HTC is still working on its VR headsets and adding cool new features. The Cosmos is definitely a very impressive headset with a gorgeous display and great refresh rate. This is a major improvement on the Vive in terms of comfort, sound, and ease of use.

The only problem is that the headset itself is very expensive, and you still have to deal with a cable that’s attached to a powerful computer that’s not built into the headset itself. The HTC Vive is also the only sustainable and officially working VR headset on a Mac.

How do I know if my computer can run VR?

Your PC is VR-ready when it fulfills the following hardware requirements.

Up until the release of macOS High Sierra, virtual reality on Apple computers has been like a dream. That is, a mere vision of what could be and never quite realized by most Mac users; however, times have definitely changed.

Because with the recent release of Apple’s latest operating system, the stage has been set for improved user experience and seems to pave the way for next-level applications like virtual reality programs; thus, ushering in an exciting new world of possibilities when it comes to seamless transitioning from mixed realities to VR (or vice versa).

How do I ensure that the VR headset is built for people of all ages?

Most VR headsets come with a 13+ age recommendation making them suitable for gaming, training, and app developments using VR experiences. Children under the age of 12 are advised not to use these VR headsets.

What VR headsets are designed for developers?

3D technology has advanced a lot in the past few decades. It used to take hours of rendering time to create a 3D model of anything but now there are faster methods for creating 3D models of objects.

Headsets that can display virtual reality can also be used for drawing and designing. Virtual reality headsets for developers are very useful for the creation of various 3D models.

App developers will not be able to create applications across all VR headsets that are available in the market.